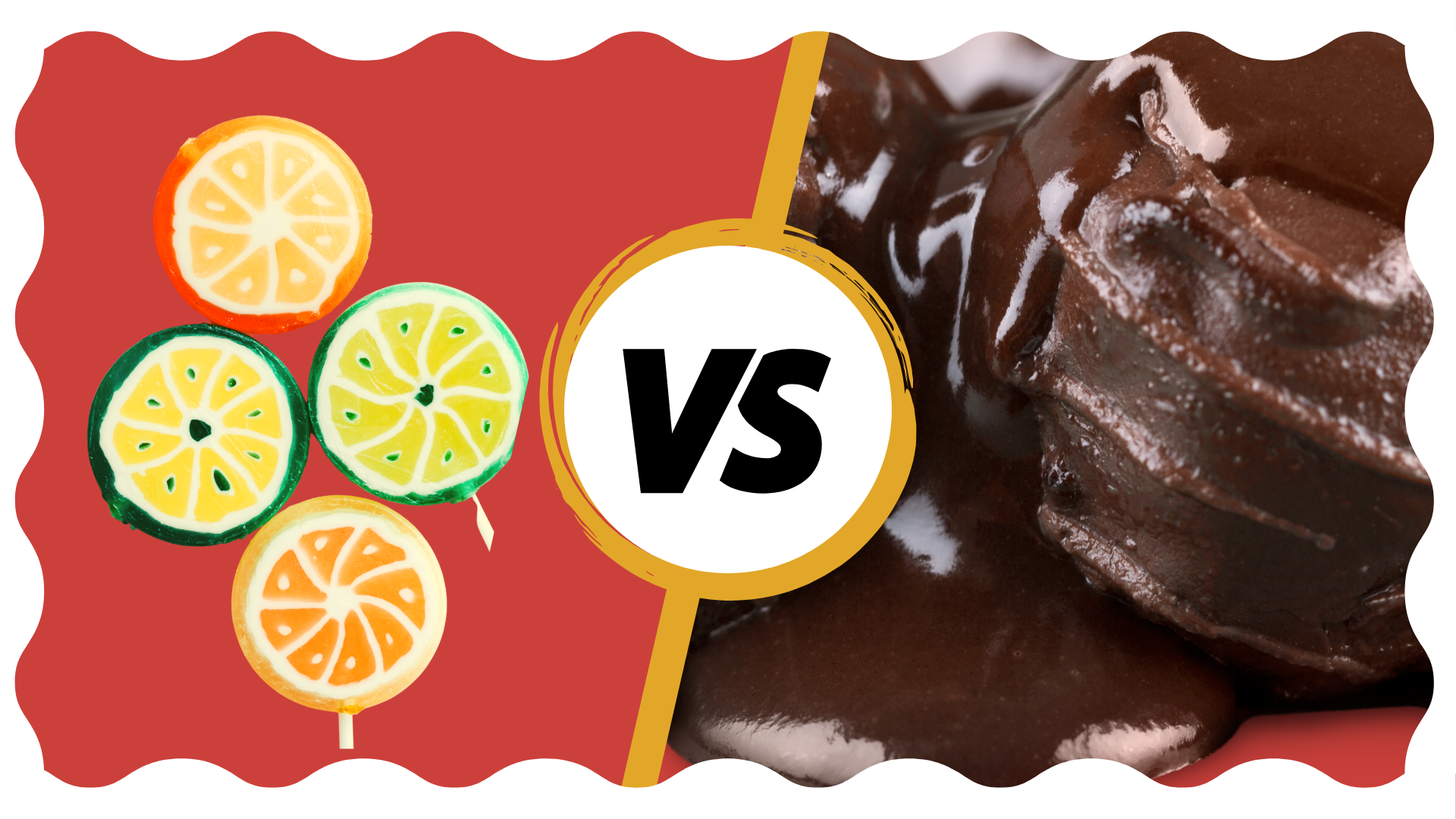 Is chocolate better than candy? Or the opposite? Is there any difference between chocolate and candy? Chocolate is a food that is made from cacao beans. It is also called cocoa beans.

Candy is like sweets which is a confection that uses sugar as a principal ingredient. Sometimes it is called sugar confectionery too.

Differences and Similarities between chocolate and candy

Definition of Chocolate and candy

Chocolate is a food made of processed cacao beans mixed with sugar or ground roasted cocoa beans which could be used as an “ingredient” in many recipes.

Candy is a sweet-tasting confectionary where sugar or sweetener is a must and artificial flavor of the fruit, chocolate, or sometimes real nuts and chocolate added to it.

The invention of chocolate and candy

In 1847, Joseph Fry created the first modern chocolate bar, he discovered the moldable chocolate paste by adding melted cacao butter. By 1868, Cadbury which was a little company, was marketing boxes of chocolate candies in England.

The candy bar was further developed in 1849 when John Cadbury introduced his brand of chocolate bar.

A typical and good chocolate must have four ingredients, they are cocoa beans, cocoa butter, sugar, and milk powder. If it is not milk chocolate, then the milk powder or alternative milk will not be there. In dark chocolate, the cocoa solid will be 50% to 90%.

On the other hand, the main ingredient of candy is sugar, the main sucrose from sugar beets or sugarcane. Other ingredients are corn syrup, corn sugar, honey, molasses, maple sugar, and non-caloric sweeteners. These sweeteners can be liquid or dry.

For Candy, first sugar is dissolving in water or milk and then forms a syrup. After that, it is boiled until it turns into the desired concentration and starts caramelizing. Different types of candy depend on the ingredients and the duration of the boiling of the mixture.

For chocolate, fermented and dried cocoa beans are refined to a roasted nib by winnowing. After that, they are heated perfectly and melted into liquid chocolate. Then, blend chocolate liquor with sugar and milk to add flavor. After the blending process, the liquid chocolate is stored at the molding factory and poured into molds. Finally, it’s ready to sell or eat.

Color of chocolate and candy

Most of the candy contains artificial colors. Sometimes fruit color and flavor are mixed with the candy. So candy can be in any color and many different sizes also.

On the other hand, Chocolate colors depend on cocoa products such as dark chocolate, milk chocolate, white chocolate, raw chocolate, and related foods and beverages such as chocolate milk. Common colors are reddish, dark reddish, brown, and caramel.

Candy is beneficial for health, it Decreases the risk of stroke and heart attack — Dark chocolate is rich in antioxidant flavonoids, which are good for your heart.

Regularly eating this rich treat can decrease your risk of stroke and heart attack by 39 percent. But excessive eating of both is really bad. 2 or 3 candies per day is not a problem to eat or a little portion of dark chocolate is ok for daily.

Candy increases the carb, so we should avoid it as an addiction. Many people have chocolate and candy for boosting their energy and it also keeps the brain active.

Candy is the best gift for all kids and young. It’s pretty hard to find anyone who does not like candy. Especially the young kids are fond of colorful candy and love to get them as a gift.

Chocolate is liked by all. Even the older people are also fond of chocolate and they used to gift it on different occasions like birthdays, marriage day, etc.

World Chocolate Day was first celebrated in the year 2009. However, some even believe that people started marking July 7 as International Chocolate Day because it was the day when chocolate was first introduced to Europe in 1550

National Candy Day 2021 in the United States is Thursday, November 4

Ferrero Rocher is the best brand of chocolate in the world, millions of people all over the world buy this chocolate every year. The company has been a leader in the chocolate industry for over 200 years. Top chocolate brands are Nestle, Milka, Ghirardelli, Cadbury, Godiva, and Ferrero Rocher.

Chocolate and candy, both are so familiar with all types and all ages of people all over the world. All use these for different purposes. Both are not similar things but both are used for all most similar purposes. Chocolate can be bitter and sweet less. But sweet is the main ingredient in candy. Chocolate is healthier and better than candy but both are famous in their position.